Alan Woods: No light bulb will shine, no wheel will move, without the kind permission of the workers of this world.

Alan Woods held a meeting with workers and students last night (November 19) in the Faculty of Medicine at the University of The Andes in Merida, to talk about the systemic crisis of capitalism on a world wide scale. Alan observed, that ironically and as the world's ruling classes are celebrating 20 years of the fall of the Berlin Wall and the demise of the Soviet Union, we are witnessing the renaissance of the ideas of scientific socialism as a historic necessity, and are experiencing concrete efforts to establish a socialist alternative to capitalist society here in Latin America, especially in Venezuela, Ecuador and Bolivia, reason for which these countries are being targeted for "regime change".

Given this context, Alan spoke about the urgent necessity for the working people to organise themselves in order to defend their class interests and exercise true popular power. He insisted that more than anything else, even than the external threat coming from the installation of seven US military bases in Colombia, the biggest menace for the fate and future of the Bolivarian Revolution comes from within, from what he calls the Fifth Column which operates from within the government and the State apparatus.

It is against this Fifth Column that the fight has to be directed in the first place, by means of the systematic, disciplined and solidaric self-organization of the working people who are the true forgers of socialism and who have to take consciousness of the invincible power they hold, not only in Venezuela but on a world scale. No light bulb will shine, no wheel will move, without the kind permission of the workers of this world, Alan reminded the audience. Thus, armed with class consciousness and organization, the Venezuelan working people have to take up the fight against the internal adversary, whilst the external threat to the Bolivarian Revolution has to be confronted by setting up armed people's militias.

The meeting had been organized by Eduardo Molina, Leonardo Badell, Ali Quero, Luis Regalado, Edwin Aguirre, Rafael Díaz and other members of the Marxist Revolutionary Current (CMR) of Mérida, was well attended and Alan's comments and suggestions were received with enthusiastic applause. The debate in the aftermath of Alan's speech gave way to an immediate initiative for effective organization among workers and students of the University of The Andes. Gerardo Sosa, general secretary of the University of The Andes Workers' Trade Union (SOULA), asked Alan to serve as a personal contact for international solidarity with similar organizations in Great Britain and Europe and thanked him for his inspirational speech. 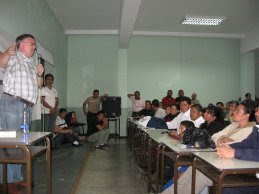 Alan speaking to workers and students 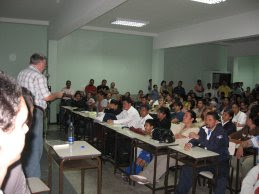 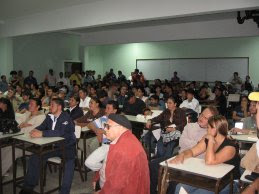 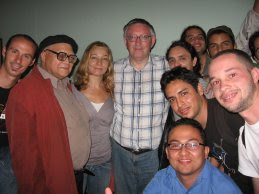 and other members of the CMR-Mérida

Posted by Jutta Schmitt at 2:17 PM 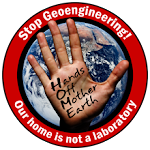 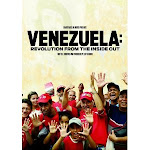